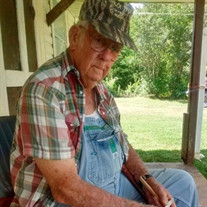 New Albany-William Lamar Moody, 95, departed this life peacefully Friday, February 4, 2022. He was born June 13, 1926 to Webster and Zora Grubbs Moody. He was a veteran and served our country in the United States Army. He married Collene Williams in 1946 and together raised a beautiful family. He enjoyed whittling, wagon riding with his team of mules, and working in the garden. He had already started to talk about planting his tomatoes for this year. Mr. Moody, a man of honor and love will be greatly missed by his family, and they know he is now reunited with his loving wife of over 70 years. He was a member of Liberty Baptist Church Services for Mr. Moody will be Tuesday, February 8, at 3:00 pm at United Funeral Service with Bro. Derrick Finley and Bro. William Cook officiating. Visitation will be from 1:00pm till the start of the service the same day and also at United. He is survived by three daughters, Judy Stout (Harvey), Pam Seger (Bobby), and Bobbie Marchman (Garry); two sisters, Mary Hall and Peggy Robertson; one brother Joe Moody; nine grandchildren, twelve great-grandchildren, and 10 great-great grandchildren. He is preceded in death by his parents, wife, Collene Moody, one sister, Margie Nell, three brothers, James Moody, Dwight Moody “Goose”, and Hubert Moody “Red”, a great grandson, Payton Murry and a great-great grandson Wyatt Darling. For online condolences please visit www.unitedfuneralservice.com United is honored to be entrusted with these arrangements. We will fly the US Army flag in honor of Mr. Moody’s service.

New Albany-William Lamar Moody, 95, departed this life peacefully Friday, February 4, 2022. He was born June 13, 1926 to Webster and Zora Grubbs Moody. He was a veteran and served our country in the United States Army. He married Collene... View Obituary & Service Information

The family of William Lamar Moody created this Life Tributes page to make it easy to share your memories.

Send flowers to the Moody family.