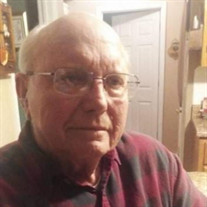 William Francis “Bill” Lyon, 92, passed away on Wednesday, March 30, 2022 at the V.A. Home in Oxford, MS. He was born March 6, 1930 in Elwood, KS to Rex Walter Lyon and Bernice Standley Lyon. He retired from the U.S. Air Force and later the U.S. Postal Service. He was a member of the New Albany Church of Christ. He worked for NASA, where some of his work included serving as an inspector for the Hubble Telescope and the space shuttles. He enjoyed working and flying airplanes, as well as hobby radio-controlled airplanes. He also enjoyed golfing, wood-working and oil painting. He enjoyed staying busy. He loved his family, his church, and his country. He was a very loved husband, father and grandfather, who will be missed. Funeral services will be at 11:00 a.m. Saturday, April 2, 2022 at New Albany Church of Christ with Craig Owen and Bro. Terry Floyd officiating. Burial with no graveside service will be at Vista Memorial Park. United Funeral Service is honored to be entrusted with these arrangements and will fly the U.S. Air Force flag during his visitation and funeral service in honor of his military service. He is survived by his wife, Grace Tackett Lyon; six daughters, Sherryie Browning (Randy), Lisa Dasis (Steve), Joanne Miller (Eric), Bonnie Owen (Joe), Pam Whitnell (Bart) and Kathy Weston; two sons, Ben Lyon (Becky) and Randy Reeder (Cheryl; sixteen grandchildren and twenty-one great grandchildren. He was preceded in death by his parents; a brother, Rex Walter Lyon, Jr. and a sister, Georgia Lee Lacy. Visitation will be on Friday, April 1, 2022 from 5:00 p.m. until 8:00 p.m. at New Albany Church of Christ. For online condolences and guest registry, please visit www.unitedfuneralservice.com

The family of William "Bill" Francis Lyon created this Life Tributes page to make it easy to share your memories.

Send flowers to the Lyon family.