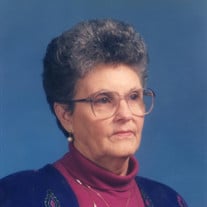 Sherman-Velora Earnestine Jolly “Teany”,94, went to her heavenly home, Tuesday, September 8, 2020. She was born August 8, 1926, to Albert Wyatt and Orlena May Murdock in Trumbull, Texas. She was married to the late, Thomas Ivy Jolly. Mrs. Jolly was a lifetime member of Sherman United Methodist Church. She was a wonderful mother, grandmother, and great-great grandmother. She was well known for her cooking, which her family loved. She had a love for baking, especially wedding cakes, until she was no longer able. Some of her favorite past times were crocheting baby clothes and blankets, and watching “Days of Our Lives”. Teany loved, and was loved greatly by her family and friends. She will be greatly missed. Visitation will be Thursday, September 10, 2020, from 2pm to 4pm at United Funeral Service. The service will begin at 4pm following the visitation at United Funeral Service Chapel with Bro. James Richardson officiating. United Funeral service is honored to be entrusted with these arrangements. She was survived by her son Reginald “Reggie” E. Jolly; two sisters-in-laws Drew Jolly, and Bea Jolly; six Grandchildren, Adam Jolly (Kristie), Rick Jolly , Kevin Jolly (Mandy), Katina Crump (Chris), Regina Martin (Wayne), and Mona Brown (Jon); twelve great-grandchildren and five great-great grandchildren. She was preceded in death by her husband, both parents, three sons; Micheal Thomas Jolly, Allen Wayne Jolly, and Terry Wyatt Jolly, six brothers, and four sisters. Online condolences may be made at www.unitedfuneralservice.com

Sherman-Velora Earnestine Jolly &#8220;Teany&#8221;,94, went to her heavenly home, Tuesday, September 8, 2020. She was born August 8, 1926, to Albert Wyatt and Orlena May Murdock in Trumbull, Texas. She was married to the late, Thomas Ivy Jolly.... View Obituary & Service Information

The family of Velora Earnestine Jolly created this Life Tributes page to make it easy to share your memories.

Send flowers to the Jolly family.