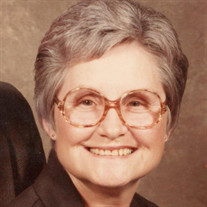 Lora Jane McGregor Turner, 96, of Ingomar passed away on Saturday, January 9th, 2021 at Union County Health and Rehab. She was born November 20, 1924 in Randolph, MS. Lora Jane Married her loving husband Lamar Turner March 1, 1941 where the couple spent 73 wonderful years together filled with children, grandchildren, and great grandchildren. Early in her life Lora Jane worked as a beautician, The Shirt Factory and Denton Mills. Later she and her husband owned and ran Turner Grocery and the local “rolling store”. Lora Jane enjoyed many hobbies such as crocheting and working outside tending to flowers and mowing the lawn. Her favorite hobby was playing the piano and organ. She played the piano and organ at Ingomar Baptist as well as singing in the Ingomar Baptist Church Sanctuary Choir, where she was a member for over 50 years. She was a faithful servant to the Lord and leaves a legacy for her family and friends to continue in this walk of life. Visitation will be Tuesday, January 12, 2021 from 11:00am till the start of the service at 1:00pm. With Dr. Terry Cutrer officiating. United Funeral Home is honored to be entrusted with these arrangements. Lora Jane was preceded in death by her Husband Lamar Turner as well as her parents, brothers, and sisters. She is survived by her daughter Carolyn (Bobby) Owens of Ingomar, 3 grandchildren Keith (Leah) Owens of Athens, AL., Beth (Tim) Taylor of Ingomar, MS, and Jeff Owens of Ingomar, 9 great grandchildren Jordan (Stephanie) Owens of Athens AL, Haley (Austin) Williams of Vardaman, Andrew (Jessie) Owens of Athens AL, Collin (Cassie) Taylor of Ingomar, Peyton (Evan) Lansdell of Mantachie, Gabe Owens of Athens AL, Emma (Nate) Flinn of Columbus, Lydia Owens of Guntown, and Carter Owens of Nettleton, 2 great great grandchildren: Easton Owens of Athens and Nora Jane Williams of Vardaman, along with several nieces and nephews. In lieu of flowers the family asks that memorials be given to the Ingomar Baptist Church choir. She will be dearly missed by many members of her family and friends.

The family of Lora Jane Turner created this Life Tributes page to make it easy to share your memories.

Lora Jane McGregor Turner, 96, of Ingomar passed away on Saturday,...

Send flowers to the Turner family.