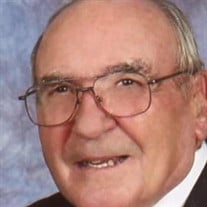 Reverend W. L. Oaks (Lonnie Wesley Oaks) passed away on August 7, 2020, at the Veterans Home in Oxford, MS. Lonnie Wesley Oaks was born on September 26, 1922 in Lafayette County to the late Reed and Ozella Oaks. He grew up on a farm and learned the value of hard work and integrity. He married his childhood sweetheart Frances Paralee Foster on December 29, 1941. They were married 68 years until her death on November 27, 2009. W.L. Oaks was a member of what has affectionately become known as, The Greatest Generation. This generation was known for their selflessness and sacrifice during the world’s most turbulent times. W.L. served in the Civilian Conservation Corp at Camp Wall Doxey for two years and then went on to proudly serve in the United States Army. During World War II, W.L. served in the 5th Army, 91st Infantry, L Company as a BAR gunner. Under the leadership of General Mark W. Clark, the 5th Army invaded Italy on September 9, 1943, becoming the first American force to invade mainland Europe. From that invasion moment until May 2, 1945, the 5th Army endured 602 days of battlefield combat, tying down at least 16 of Hitler’s divisions while taking 212,112 prisoners of war. For his part, W.L. was awarded the Bronze Star service medal for his gallant service in a battle with Axis enemies wherein the fighting got so fierce, his BAR rifle melted from the heat of the ammunition discharge. During this same battle, he was injured and was also awarded the Purple Heart. After recovering from his injuries, he remained in service of the Army until the war was over. After returning home from the war, he owned and operated several service station businesses and served on the draft board for Union County. He loved people, his country, his family and most importantly his Lord Jesus. In 1956 he was ordained to preach the Gospel at Glenfield Baptist Church by his dear friend Rev. W. J. Clayton. He was called to pastor County Line Baptist Church and Carey Springs Baptist Church. To further his education, he moved his family to Newton, MS in order to attend Clarke College and later attended pastoral training at Blue Mountain College. W.L. served long and multiple stints at Northside Baptist Church, Belden Baptist Church, Blue Springs Baptist Church and Golden Central Baptist Church. During his time at Golden, the church suffered a devastating building fire that consumed the vast amount of historical records, memorabilia, literature and educational material W.L. spent a lifetime accumulating. He even lost his original service medals in the consuming fire. Realizing the church is made of its people, not of its buildings, they re-built under his leadership and still serve the Golden community today. Through his long tenure of service preaching the Gospel, people who knew him best came to know him simply as, Brother Oaks. Upon his full-time retirement, he served in many interim roles at Auburn, Carey Springs, Toxish and Fairfield. He preached many revivals in Alabama, Arkansas, Mississippi, Tennessee, Louisiana, and Illinois. His love of preaching never left him. Even at the age of 97 while living at the Veteran’s Home in Oxford, MS; the administration staff still called upon Brother Oaks to offer a word of encouragement and a prayer for everyone convalescing there. Survivors include two daughters: Patsy Diane Oaks Williams (Kenneth) of Tupelo, MS, Linda Grubbs (Larry) of Memphis, TN and a son: Lonnie Wesley Oaks, Jr. (Rowena) of Como, MS. A brother, Dalton Oaks of Pontotoc, MS. His Grandchildren: Ken Williams (Amy), Scott Williams (Stacy), Jason Grubbs (Amanda) and Lauren Lawhorn (Josh). His Great Grandchildren: Austin Grubbs, Shawn Grubbs, Olivia Lawhorn Isabella Lawhorn, Emily Williams, Luke Williams, Sam Williams Weston Williams and many nieces and nephews. He was preceded in death by his parents, his loving wife Frances Paralee Foster Oaks; son, Billy Wayne Oaks; Grandson, Kevin Dale Grubbs; Brothers: Gene, Dewey and Randolph Oaks; Sisters: Lillian Oaks Messer, Hattie Reed Oaks Stroud, and Beulah Mae Oaks Murphree. He was a member of First Baptist Church New Albany, a mason and a member of the American Legion Post 72. If he were here today, he would tell you: It is well with my soul! There will be a graveside service at 10:30a.m. Monday, August 10,2020 at Vista Memorial Park with Bro. Tom Sumrall, Bro. Andrew Chesteen and James Byers officiating.

Reverend W. L. Oaks (Lonnie Wesley Oaks) passed away on August 7, 2020, at the Veterans Home in Oxford, MS. Lonnie Wesley Oaks was born on September 26, 1922 in Lafayette County to the late Reed and Ozella Oaks. He grew up on a farm and... View Obituary & Service Information

The family of Lonnie WL Oaks created this Life Tributes page to make it easy to share your memories.

Send flowers to the Oaks family.