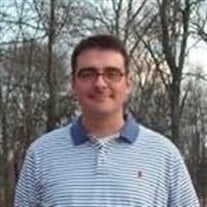 Joseph Owen Everett was born November 30, 1974 in Cleveland, MS. He passed away on January 20, 2020 in Tupelo, MS. Joseph was the youngest child of Terry Eugene and Martha Vance Everett. He received infant baptism at St. Luke United Methodist Church in Cleveland, MS and was later confirmed into the faith there. Joseph graduated from Cleveland High School in 1993. While in high school, Joseph was an excellent student taking all the accelerated classes offered in math. He was a gifted musician, leading the drum corps in the high school band. He also spent time playing in various bands outside of school. Joseph was also a gifted athlete, winning the state high school golf championship his senior year. His remarkable hand eye coordination helped to keep spending money in his pocket as he was a great pool player possessing his own personal pool cue. He enjoyed his part time job at the Cleveland Country Club, mixing and mingling with other golfers there. Upon graduation, he enrolled in Delta State University where he was a member of the Kappa Alpha Order living with his lifelong friend Brad Young. Joseph and Brad transferred to Mississippi State University their junior years to continue their studies in specific degree programs offered there. Joseph graduated from Mississippi State University with a degree in Industrial Engineering. While doing a college internship in Tupelo, he met his beautiful bride, Angie, and they were married in 2000. Two amazing children were born to them, Maggie Jo and Owen. Joseph loved watching Maggie Jo play soccer and Owen is carrying on his dad’s legacy by playing the drums and golf. Joseph is preceded in death by his parents Terry Eugene and Martha Vance Everett; his grandparents Owen and Ruth Briggs Everett and Joseph and Myrtle Fisher Vance; and his sister-in-law Tracy Jo Olson. Joseph is survived by former wife Angie Futato Yerby (Vance) and his beautiful children Maggie Jo Everett and Joseph Owen Everett Jr. of New Albany, MS; sister Paige Everett Rackley (Carl), niece Mary Claire Rackley of Gulfport, MS; and niece Kristen Blair Olson of New Albany, MS along with numerous aunts, uncles, cousins, and friends. Visitation will be at First United Methodist Church in New Albany, MS on Saturday February 1, 2020 from 10 am to 12 pm. The memorial service begins at 12 pm. The Interment of the Ashes will take place Saturday, February 29, 2020 at 10:00 am at Calvary Episcopal Church in Cleveland, MS.

The family of Joseph Owen Everett created this Life Tributes page to make it easy to share your memories.

Send flowers to the Everett family.