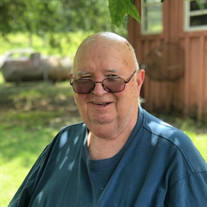 Joel Wayne “Bozy” Hall, beloved son and brother, devoted husband, cherished and respected father, doting Papa and humble friend, went home to be with the Lord July 11, 2019. He leaves behind his wife of twenty-two years, Janice Cousar Hall, his children, Lori Spencer (Dennis), Lisa Bogue (Gerald), Joel “Jody” Hall, Jr., Suzie Bryson (Jim), Jessica Jordan (Jason), Shea Jarrett (Trisha), 17 grandchildren and 15 great grandchildren, his brother, Richard Hall (Gabby), his sister, Dorothy Hall Haley, as well as multiple loved nieces and nephews. He is preceded in death by his parents, Joel W. and Etna Mize Hall and his sister, Sara Lynn Hall McNeal. Joel was born Dec. 7, 1943 to Joel and Etna Hall. He was a 1962 graduate of Ingomar Attendance Center and a retired truck driver from Brookwood Funiture. He was a member of Hillcrest Baptist Church. Joel lived a life of service to others, he loved and spoiled his family and friends. He strove to live by Proverbs 18:24, “A man who hath friends must shew himself friendly”. He had such a big loving, giving and humble heart. He never sought recognition but tried to spread a bit of sunshine wherever he went. He not only taught his children the meaning of hard work and earning an honest living, respect for themselves and their fellow man, discipline, humility, loyalty, integrity, love, honor, and sharing, but he lived it before them and was a shining example for them to follow. Joel believed in loving the Lord, kept promises, family togetherness, hearty laughter, and shared happiness. He adored his puppies Lucy and Sunni. He knew that wealth was not found in material things but in the hugs and I love you’s from his wife, children and grandchildren. He relished time spent giving back to others, making memories cooking for his family around a BBQ grill, the birth of each grandchild and great grandchild, homeruns and stolen bases, enjoying a good western at home, firing off rounds of ammunition at targets, trying to catch that big fish, and seeing the accomplishments of his children, grandchildren and others. He loved his family, his friends and his Hillcrest Church family where he will also be greatly missed and remembered as “the Candy Man”, because he would share his sweet smile and a piece of candy with anyone and everyone that was lucky enough to cross his path. Joel left a legacy of love, laughter and humbleness that will last for generations to come. He will be greatly missed. He was truly one blessed man, he loved with all his heart, and he was loved fiercely by not only his family but by anyone that was blessed enough to get to know him. Visitation will be on at Hillcrest Baptist Church on Saturday, July 13, 2019 from 11:00a.m. until service time at 2:00p.m. with Bro. Whit Lewis officiating. Burial will be at Vista Memorial Park. United Funeral Service is in charge of the arrangements. Pallbearers will be Adam Fitts, Terry Dowty, Riley Bogue, Owen Jordan, Neal Jarrett, Wes Jarrett and James Houston Jordan. Honorary pallbearers will be Seth Hall and Walker Bryson In lieu of flowers donations can be made to Hillcrest Baptist Church, our Autism Speaks. Please mail to Hillcrest Baptist Church, 216 Hwy 15 South New Albany, MS 38652. In the memo put in Night to Shine.

The family of Joel " Bozy " Wayne Hall created this Life Tributes page to make it easy to share your memories.

Send flowers to the Hall family.