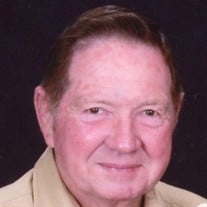 James Chosen Coker, 80, went to his heavenly home Saturday, May 29, 2021. He was born to Kermit Chosen Coker and Edna Basden Coker on January 4, 1941. He began his working life on the family farm, caring for the milking cows and working the cotton fields. After graduating from Center High School, he graduated from Northeast Mississippi Community College, and went to work briefly at Mid-South Packers, and then on to what was the Mississippi Highway Department. After marriage, he and his wife, Jonell, moved to Tupelo. For most of the 70’s and part of the 80’s he was a quality control engineer, running specification checks on asphalt, sand, and gravel for C&F Contracting, which later became Cook Construction. He then returned to MDOT as a bridge crew foreman, where he retired after 25 years of combined service. Mr. Coker also retired from the Mississippi Army National Guard. He started his military career in the 108th Calvary in New Albany and finished in the 155th Armored Brigade as 1st SG in Tupelo. He loved spending time with his grandchildren, being outside, riding his four-wheeler on family land, and helping with the cotton harvest on the farm. He also enjoyed working with wood, making walking sticks for old friends and sling shot stocks for kids. During the summer months he would be seen out in the garden with his grandchildren, teaching them about planting okra, corn, peanuts, and tomatoes. He always enjoyed seeing old friends and meeting new people, and seemed to have an old funny story to tell about almost situation. He was a member of Ellistown Baptist Church. Services will be Wednesday, June 2, 2021 at 11am at United Funeral Service with Bro. Mike Powell and Bro. Frank Panzrino officiating. Visitation will be from 5 till 8 pm Tuesday June 1, 2021 at United Funeral Service. Burial will be at Glenfield Memorial Park in New Albany, MS. He is survived by one son, Kerry Lynn Coker (Tabatha), a grandson, Caleb James Coker, a granddaughter, Katie Jewel Coker, and one brother Larry Coker (Paula). He is preceded in death by his parents, his wife, Jonell Sanders Coker, one son, Edward Thomas Coker, and one brother Billy Basden Coker. Pallbearers will be William (Buddy) Hitt, Bobby Lee Rogers, David Chaney, Brian Crump, Steve Coker, and Mike Moore. Honorary Pallbearers are the Senior Men’s Sunday School Class of Ellistown Baptist Church. For online condolences please visit www.unitedfuneralservice.com United is honored to be entrusted with these arrangements. United will fly the United States Army flag in honor of his service to his country.

James Chosen Coker, 80, went to his heavenly home Saturday, May 29, 2021. He was born to Kermit Chosen Coker and Edna Basden Coker on January 4, 1941. He began his working life on the family farm, caring for the milking cows and working the... View Obituary & Service Information

The family of James Chosen Coker created this Life Tributes page to make it easy to share your memories.

James Chosen Coker, 80, went to his heavenly home Saturday, May...

Send flowers to the Coker family.