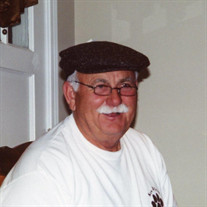 David Joe Rowan passed away peacefully at home, surrounded by family and friends on October 31, 2020. He was born November 22, 1946 to the late Eugene Rowan and Josephine Garrett Rowan. He attended Center School and graduated from East Union High School. He was drafted into the Army and served in Germany during the Vietnam Conflict. After service he attended Mississippi State University where he graduated in Agriculture Education. Later, he owned and operated Discount Furniture and also was co-owner of G & R Sales, where he delivered furniture to several states. After many years of travel, he became manager of Cotton Plant Gin and Grain Elevator and later became co-owner. But what he found the most joy and satisfaction in was his times he spent at auctions, estate sales and his store, “Trio Sales.” He affectionately named his store “Trio Sales” after his three grandchildren, who were the joy of his life. He and his wife, Becky Taylor, married while he was in service. He has two children whom he dearly loved, Dr. Kevin Rowan (Allison) and Tammy McDonald (Michael); five grandchildren, Zachary McDonald, Caleb McDonald, Charlsey Rowan, Rhett Stegall and McKinley Stegall. He is also survived by brothers, Benny Rowan (Patsy), Billy Rowan and Jackie Rowan (Linda); sisters, Margaret Pannell, Nancy Tompkins (Cecil) and Shelia Barton. He was preceded in death by his parents; a brother, W.C. Rowan; a sister, Cupel Rowan Andrews; and a brother-in-law, Roy Pannell. Funeral services will be at 11:00a.m. Tuesday, November 3, 2020 at First Baptist Church of New Albany with Bro. Andrew Chesteen and Bro. Harvey Sewell officiating. Burial will be a New Harmony Cemetery. United Funeral Service is honored to be entrusted with these arrangements. Visitation will be on Monday, November 2, 2020 from 5:00p.m. until 8:00p.m. at First Baptist Church of New Albany. Pallbearers will be Clark Rowan, Jack Rowan Jr., Michael Rowan, Marty Rowan, Tim Rowan, and Gene Pannell. Honorary Pallbearers will be Lamar Garrett and Rick Triplett The family request that memorials be made to the Acts 1:8 Mission Fund, First Baptist Church of New Albany. In honor of Mr. Rowan’s service to his country, United Funeral Service will fly the U.S. Army flag during his visitation and service.

David Joe Rowan passed away peacefully at home, surrounded by family and friends on October 31, 2020. He was born November 22, 1946 to the late Eugene Rowan and Josephine Garrett Rowan. He attended Center School and graduated from East Union... View Obituary & Service Information

The family of David Joe Rowan created this Life Tributes page to make it easy to share your memories.

David Joe Rowan passed away peacefully at home, surrounded by...

Send flowers to the Rowan family.