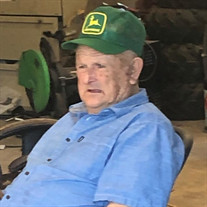 New Albany-Curtis “Daddy Sam” Camp, 84, gained his wings for flight to his heavenly home Friday, March 5, 2021. He was born May 21, 1936 to Virdus E. Camp and Bessie Adair Camp. He was an employee of MDOT for 32 years, served in the National Guard, and was a farmer. He was a board member for the Keownville Water for 30 plus years and was a member of Mount Olivet Methodist Church. He had a passion for farming and enjoyed working with his cattle and watching his grandchildren Brian and Chris work the land. His favorite past times were spending time with his buddies at the shop, talking about politics and telling humorous stories. His pride and joy were his great grandchildren Tyler and Maddie. He was so loved by all his family and will be missed beyond measure. A private family service for Mr. Camp will be Sunday, March 7, 2021 at 3:00pm in the chapel at United Funeral Service with Bro. Don Wilson and Bro. Daniel Hathorne officiating. A public visitation will be from 1pm till 3pm on March 7, 2021 at United Funeral service. He is survived by one daughter, Sandra Jones (William) of Dumas; two grandsons Chris Camp (Marlee) and Brian Camp (Emilee) both of Dumas; one granddaughter Summer Lauren Camp of Southlake TX; and two great grandchildren, Tyler and Maddie Camp of Dumas; and his special friend and loyal companion “Gus”. He is preceded in death by his parents, his wife, Bettie Ruth Beaty Camp; and one sister Cebelle Blassingame. Pallbearers will include; Danny Cobb, Justin Greer, Butch Cobb, Jeff Chism, Brett Willard, Don Evens, Sammy Chism, and Gary Wayne Rolison; honorary pallbearers are Keownville Water Board Members, Jim Allen Browning, James Power, Leon Hall, Wade Chism, and David Hodges. For online condolences please visit www.unitedfuneralservice.com. United Funeral Service is honored to be entrusted with these arrangements.

The family of Curtis Camp created this Life Tributes page to make it easy to share your memories.

Send flowers to the Camp family.