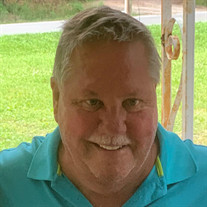 Clifton Dwayne Hudson, Sr., 59, passed away on Sunday, August 25, 2019 at his home. He was born May 27, 1960 in Memphis, TN to Grady P. Hudson and Doris G. Bain (Hudson Swinford.) He was a beloved husband, father and grandfather. He adored his grandchildren and loved spending time with them. In his professional career he worked at Mohasco. He left his career at Mohasco to become a successful businessman in the auto body and salvage industry. When he wasn’t spending time with his family and friends, he was devoted to his business. Dwayne Hudson was a man that always had a smile on his face and never met a stranger. If you ever had the privilege to meet him, he became a friend. He will be deeply missed by many family and friends. Funeral services will be at 2:00p.m. Wednesday, August 28, 2019 at United Funeral Service with Bro. Larry Bain, Bro. Terry Hudson and Bro. Randle Harris officiating. Burial will be at Christian Rest Cemetery. United Funeral Service is in charge of the arrangements. He is survived by the mother of his children, Cindy Hudson; his sons, Clifton Dwayne Hudson, Jr. (Nikki) and James Manuel Lee Hudson (Jennifer); his adopted sons, Carol D. Frazier and Tommy “Cotton” Gates; his sisters, Karen Braden and Joyce Wilson; his brothers, James P. Hudson and Darrell Hudson; six grandchildren: Mindy Lynn Hudson Dees, Courtney Nicole Hudson, Clifton Dwayne Hudson, III; Chelsey LeeAnn Hudson, James Chandler Hudson and Chloe Alyssa Hudson. He was preceded in death by his parents and a sister, Doris Downing. Pallbearers will be Chandler Hudson, Dustin Dees, Clayton Russell, Carey Busby, Larry Shaffer, Louis Smith, Robert Russell and Alton Brock. Honorary pallbearers will be Bill Azlin, Sam Hudson, Austin Hudson, Tommy Gates, Carol D. Frazier, Matt Hudson and Ben Morrison. Visitation will be Tuesday, August 27, 2019 from 5:00p.m. – 8:00p.m. at the funeral home.

Clifton Dwayne Hudson, Sr., 59, passed away on Sunday, August 25, 2019 at his home. He was born May 27, 1960 in Memphis, TN to Grady P. Hudson and Doris G. Bain (Hudson Swinford.) He was a beloved husband, father and grandfather. He adored... View Obituary & Service Information

The family of Clifton Dwayne Hudson Sr. created this Life Tributes page to make it easy to share your memories.

Send flowers to the Hudson family.