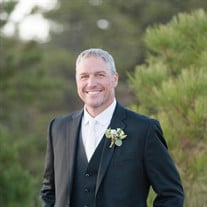 Chris Dillard Kidd, 50, passed away at his home on July 30th, 2021. He was born May 1st , 1971 in Memphis, TN, to Nellie Dillard Kidd and Wallace B. Kidd. Chris had recently began working as a salesman for Panola Paper Company after retiring from the Mississippi Public Education System as a teacher, coach and principal of 25 years. Chris was a star at Ingomar HS, playing basketball and baseball. He broke multiple records on the baseball diamond, and had his jersey, #9, retired there. After his graduation from Ingomar in 1990, He attended Freed Hardeman University on a baseball scholarship. He played 4 years at Freed Hardeman, setting many athletic records there as well. He graduated with a BS in Physical Education. He went on to complete a Masters of Educational Leadership from the University of Mississippi in 2010. Chris was an avid fisherman. Be it bass, crappie, or catfish, he loved being on the water. His biggest love, however, was coaching young boys and girls in HS baseball and softball. Chris won 7 state championships in girls’ softball for Nettleton and Ingomar. He was a multiple Coach of the Year winner and inductee into the MS High School Hall of Fame. His motto on and off the field was “Good is the enemy of great”. Whether it was coaching or as an administrator, he loved helping people and had a unique way of cutting to the heart of the matter with kindness. This was illustrated through serving as a softball and baseball umpire, serving as a church deacon, and being a part of multiple disaster relief teams. His impact on his community and all the lives he touched will live on through the multitudes of young women and men he coached, as well as all those he worked with through his years in the school system. He will be sorely missed. Visitation will be Tuesday, August 3rd from 5 to 8 PM at United Funeral Service in New Albany. A celebration of life will be Wednesday, August 4th at 2 PM at United Funeral Service in New Albany, followed by a graveside service at Shady Grove Cemetery in Pontotoc County. He is survived by his loving wife of 3 years, Kim Herring Kidd; his sons, Brock Kidd of Tupelo, Tyler Jones of Water Valley and Kyle (Megan) Jones of Ingomar; his three brothers, Don (Evelyn) Kidd of Hartford, KY, Jeff (Linda) Kidd of Booneville, and Steve Kidd of Grenada; and one grandchild, Hardin Jones. He is preceded in death by his parents, Nellie and Wallace, and his sister, Loretta Phipps. United Funeral Service is honored to be entrusted with these arrangements. For online condolences and guest registry, please visit www.unitedfuneralservice.com

Chris Dillard Kidd, 50, passed away at his home on July 30th, 2021. He was born May 1st , 1971 in Memphis, TN, to Nellie Dillard Kidd and Wallace B. Kidd. Chris had recently began working as a salesman for Panola Paper Company after retiring... View Obituary & Service Information

The family of Chris Dillard Kidd created this Life Tributes page to make it easy to share your memories.

Send flowers to the Kidd family.