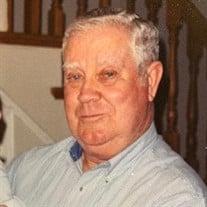 “We are confident, I say, and willing rather to be absent from the body, and to be present with the Lord” II Corinthians 5:8 Charles Eron Parker passed away peacefully on October 31, 2019 following a lengthy illness. Mr. Parker was born on February 14, 1934 in Calhoun County to Clifford Lee and Leila Murphree Parker. He grew up in the Lloyd community and was a 1955 graduate of Bruce High School. He continued his education at Itawamba Junior College and Mississippi College. In 1959 Charles went to work for Boyd Construction and helped in the construction of Interstate 55. In 1960 he moved to the Mississippi Delta where he met and married Nan Anthony Parker in 1962. They were blessed with two daughters, Lisa and Allison. Charles and Nan owned Quality Farmers Supply Company and Automotive Service Center in Indianola for over 40 years. Charles accepted Jesus Christ as his Savior in the summer of 1971 at a revival at Fairview Baptist Church where he remained a member until moving to New Albany. “Mr. Charles”, as he was known to most, enjoyed getting in his truck and riding “up the country” to visit family and friends. He loved being in nature, monitoring the weather, training bird dogs, hunting quail, collecting shotguns, and telling stories about the good ol’ days. Like his mother, Charles was a lifelong learner, enjoying history and genealogy up until the very end of his life. Before his sight was lost, he was an avid reader. When he received a new book, he would spend the entire day pouring over every page and photograph. In 1999, they moved from Indianola to Ingomar (New Albany area), where they enjoyed making new friends and spending time with their four grandsons. In his retirement, Charles enjoyed restoring his collection of antique cars and tractors and growing watermelons. He affectionately became known around New Albany as the “Watermelon Man” and was proud to offer the most delicious watermelons in the area to local stores to sell. Charles was a member of Fredonia Baptist Church and enjoyed frequent visits in his home from members of his church family. Charles was blessed with a wonderful memory and could recall how cold it was on a certain day in the 1950s. Earlier this year, he could still name every member of his first grade class in school or recite a piece of poetry that he recalled learning in his younger years. Charles is survived by Nan, his wife of 57 years, his daughter Lisa Parker Tankersley (Phil) of Frisco, TX and Allison Parker White (John), grandsons Reid, Parker, and Jack Spencer and John Clayton White all of Tupelo. He is also survived by his sister-in-law Betty Sue Clark Parker of Corinth, Clark Parker (Pat E.) of Tupelo, and Dale Parker (Susan) of Corinth, numerous nieces and nephews, and special “adopted” son George Baird, IV (Cari) and special “adopted” daughter Deborah Hunnicutt (Randy). Charles is preceded in death by his parents, Cliff and Leila and his brother Glen. A Celebration of Life service will be held on Sunday, November 3, 2019 at 3:00 p.m. at Fredonia Baptist Church in New Albany with Rev. Wayne Frederick officiating. The family will greet friends from 1 p.m. until 3 p.m. A private graveside service will precede the service. United Funeral Service is in charge of the arrangements. Honorary pallbearers are Billy Wyatt, George Baird IV, John Robert Parker, Johnny Thompson, Charles Herring, Paul Sheffield, Tony Montgomery, and David Jolly The Parker family would like to extend our gratitude to the staff of Sanctuary Hospice for their loving care. In lieu of flowers, memorials may be made to Fredonia Baptist Church, Baptist Children’s Village, or Sanctuary Hospice House.

&#8220;We are confident, I say, and willing rather to be absent from the body, and to be present with the Lord&#8221; II Corinthians 5:8 Charles Eron Parker passed away peacefully on October 31, 2019 following a lengthy illness. Mr. Parker... View Obituary & Service Information

The family of Charles Eron Parker created this Life Tributes page to make it easy to share your memories.

“We are confident, I say, and willing rather to be absent from...

Send flowers to the Parker family.