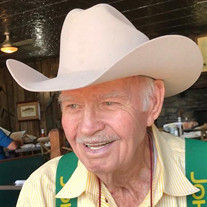 New Albany, MS- Charles Eugene Garrett, 92, passed away Saturday, December 21, 2019 at Magnolia Manor Personal Care Home in Lee county. He was born August 17,1927 in McNary county, TN to the late Robert Emmett and Teadie May McCormack Garrett. He was a member of First United Methodist Church in New Albany, MS. He served his country in the U.S. Navy and U.S. Air Force during World War II. He received his Master’s Degree in education and retired from the Memphis City Schools. Funeral services will be Thursday, December 26, 2019 at United Funeral Service at 1:00pm with Bro. Dustin May officiating. United Funeral Service is in charge of the arrangements. The American Legion will present honors to the family. Burial will be at Magnolia Gardens on highway 45 Corinth, MS. Our Dad made an impact on everyone he met. With his engaging smile and dynamic personality, people were drawn to him. To many, he was bigger than life. He was John Wayne like. He was the master of his universe. As a teacher, coach, and administrator, he was dedicated to those with whom he worked. He challenged young boys to become men. Daddy loved his family who saw him as their hero. He grew up, one of the five children, picking cotton as his family were sharecroppers. At 16, he went to WWII during which his brother, Robert was killed. He valued education and was the first of his family to graduate from college, completing two degrees. He passed that along to his kids and very generously offered to pay for college degrees for others. At one point someone asked how he was doing. I replied, “Everything is breaking down but his heart”. I meant the physical heart, but, ironically, it was even more accurate for his heart and love for others. During his last days, his four children grew much closer together in his care. We loved our Daddy. He is survived by two daughters, Peggy Ann Jeanes, Janet Garrett Lutz; two sons, Charles E. Garrett, Jr., Jerry Wayne Garrett; one sister, Joyce Hudson; twelve grandchildren; seventeen great grandchildren. He was preceded in death by his parents; one sister, Mary Bess Garrett Gray and two brothers, Robert Reford Garrett, Mack Arthur Garrett. Pallbearers will be, Stephen Grey, Brent Aaron, Robert Garrett, Holt Garrett, Arthur May, Emma Garrett, and Dana Jeanes. Honorary pallbearers will be the members of American Legion Post 72. Visitation will be, Thursday, December 26, 2019 from 11:00 am to 1:00 pm at United Funeral Service. In honor of Mr. Garrett’s service to his country the U. S. Navy and U. S. Air Force flags will be flown during his visitation and service.

The family of Charles "Bud" Garrett created this Life Tributes page to make it easy to share your memories.

Send flowers to the Garrett family.